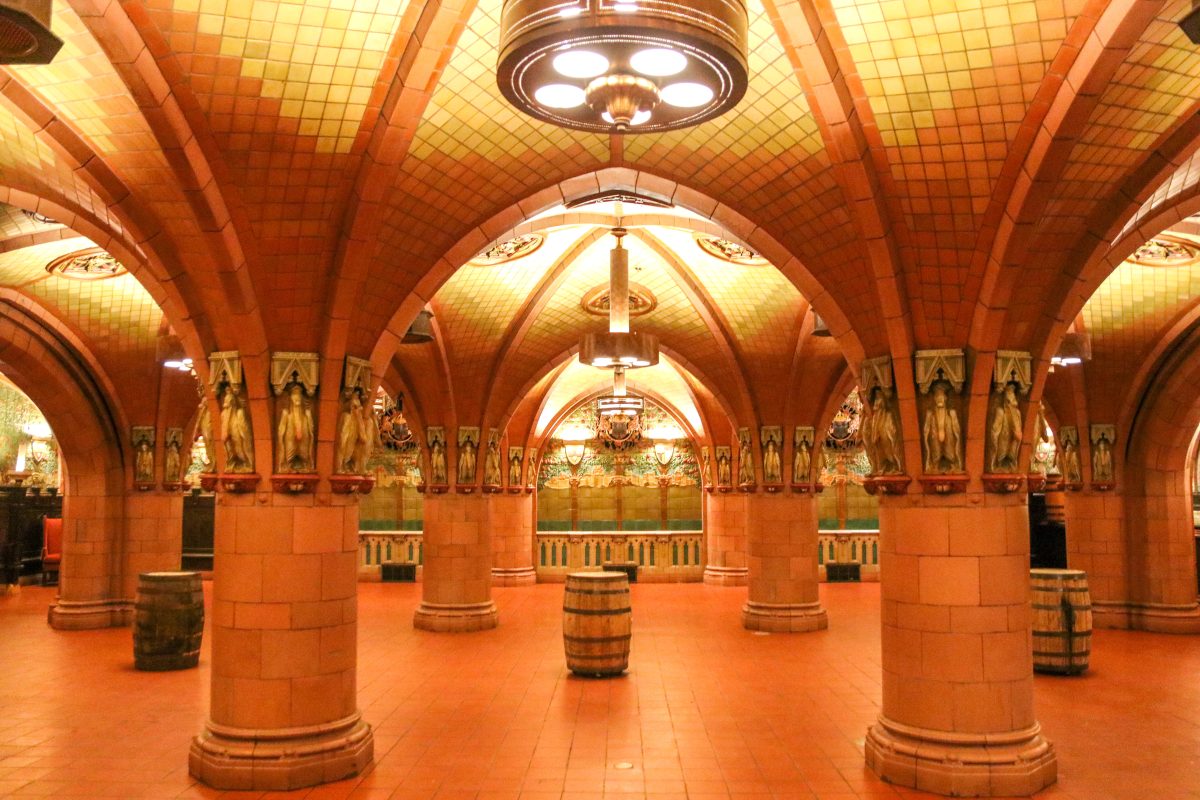 Hey, y’all! Did you know that the world’s only room constructed of Rookwood Pottery is in Louisville, Kentucky? The Rathskeller Room at the Seelbach Hotel, which is located on the bottom floor of the property, is truly a spectacle to be seen in Derby City. I would argue that it is the most impressive room in the city.

The Bavarian-style Rathskeller Room was constructed of Rookwood Pottery in 1907. A unique work of art and the only room of its kind in the world (that’s still intact), this room is an ornate, preserved part of American history. The decorations of the room were drawn by hand on the clay before firing; the design was a part of the ware. After baking, various glazes were added in subsequent firings. A portion of the ceiling is made of leather and was painted with intricate designs (including the twelve signs of the zodiac). The Rathskeller has been the site of many social and business functions & continues to be, in current times, a popular meeting place at the Seelbach.

F. Scott Fitzgerald visited both the Seelbach and the Rathskeller, which served as inspiration for his legendary “The Great Gatsby”.

One of my favorite features of the Rathskeller? The pelicans that gaze at you from around the room. Very ominous and somewhat odd, though extremely captivating.

“The new rathskeller of the Seelbach Hotel is perhaps the most notable use of decorative tile in this country, if not anywhere.” – The Mantel, Tile and Grate Monthly, January 1908

The Seelbach Hilton is equal parts historical landmark and architectural masterpiece. It began as the dream of two Bavarian brothers – Otto and Louis Seelbach – in 1869 when Louis came to Louisville to learn the hotel business.

In 1903, after several years of running restaurants and gentleman’s clubs, the brothers began construction of a new hotel at the corner of 4th and Walnut Street (now Muhammad Ali), creating a lavish, turn-of-the-century Beaux Arts Baroque hotel.

Sparing no expense, they imported marbles from all over the world, bronzes from France, hardwoods from the West Indies and Europe, linens from Ireland, and valuable Turkish and Persian Rugs.

The Seelbach opened in May of 1905 and garnered an incredible 25,000 visitors on opening day. The hotel was so popular that the Seelbach brothers began a 154-room addition in the fall of that same year.

Visit the Rathskeller + the Seelbach Hotel

Enjoy reading “The World’s Only Rookwood Pottery Room: The Rathskeller Room at the Seelbach Hotel”? Read my other blog posts here.

Where To Order A T-Shirt Quilt