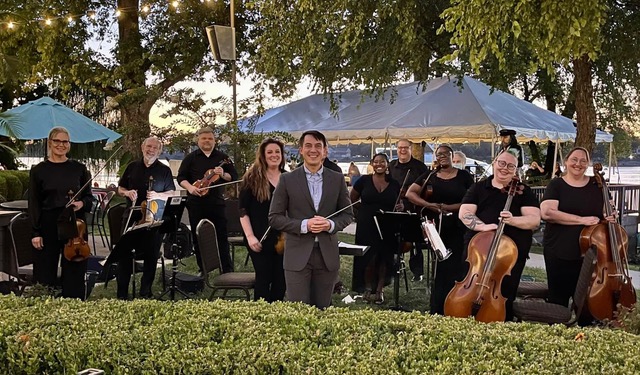 The Louisville Civic Orchestra (LCO), the city’s oldest continuously-performing orchestra, welcomes warmer weather ahead – as well as the reawakening of nature – with the group’s upcoming “Pastorale” spring concert on March 9. The LCO is an all-volunteer group of almost 60 professional and amateur musicians from all backgrounds, ages, and regions. The Orchestra performs up to five free concerts per year in an effort to provide affordable cultural opportunities for residents across Kentuckiana.

For its Pastorale concert, the Orchestra is excited to invite guest conductor Nicholas Finch (who also previously appeared with the LCO as guest soloist on cello) to share conducting duties with LCO Artistic Director Gabriel Lefkowitz.

Cost: Free Admission to All

An Interview with Jon Wysong, President of the Louisville Civic Orchestra

For those unfamiliar, tell us more about the Louisville Civic Orchestra.

The Louisville Civic Orchestra is an open, community-driven musical group that has a long history with the city. It was founded in 1915 under the Young Men’s Hebrew Association. Eventually in 1937, the Louisville Orchestra broke out of this group as some of the more seasoned musicians looked for more opportunities. The ensemble continued and eventually changed its name to the JCC Orchestra, when it was fully adopted by the Jewish Community Center. In 2015, a group of member musicians decided to form a board, claim its own 501(c)3 status, and ensure its long term survival. The LCO takes pride in the fact that, since 1915, concerts have remained free to attend. Our goal is to make sure that anyone in the area who wishes to experience symphonic music can do so without the barrier of cost. Finally, everyone at the LCO is a volunteer (only guest artists are paid).

If someone has never attended a LCO concert, what should they expect?

Concerts resemble a somewhat typical symphony orchestra experience. Upon entry, you will receive a program and be directed to the audience seating area. Seats are first come, first served, so we encourage audiences to arrive about 10-15 minutes prior to the concert for ample choices. Dress as you like. Some guests prefer more formal attire, but jeans and a t-shirt are welcome at LCO concerts. While the orchestra is playing, we do expect cellphones to be silenced so as to not disturb the experience for others. Guests will be encouraged to donate at our concerts, as there are associated costs with performances.

What goes into the music selection process for LCO’s performances?

The LCO gathers selected musicians and board members into an artistic direction committee. The committee is presented with collected survey results given by the orchestra membership as to what they want to play. The Artistic Director then works with committee members to form a season of concerts that include pieces from the survey results and from the AD’s general vision for the orchestra. Generally speaking, the committee works to choose pieces that are exciting for both audience members and musicians, fit well within the skill level of the orchestra, and are either affordable to play or would spark enough interest for possible sponsorship. The committee sends their proposed season choices to the board for approval each spring.

Tell us about the upcoming show + what music we can expect.

The theme of this concert is “pastorale”, a word meaning a focus on rural life or scenes of nature. Generally speaking, March is the month where weather begins to warm and we begin to think of nature “coming back to life” as a result. The audience will first be treated with Aaron Copland’s An Outdoor Overture, which could easily be included alongside some of his other “American” sounding pieces like Billy  the Kid, El Salon Mexico, and Rodeo (all depictions of the wild west). Then, we feature African American composer William Grant Still with Wood Notes. It’s a four movement suite that is impressionistic in nature, evoking scenes of a “singing river”, “autumn night”, “moon dusk”, and more. Finally, we cap off the concert with Beethoven’s Symphony No. 6, aptly nicknamed Pastorale. This five movement symphony has explicit reference to nature, such as bird calls played by woodwind instruments in the second movement.

Is it true that the show is provided free of charge?

It is true, yes! We will, however, encourage you to donate to the LCO to help offset associated costs for concerts such as sheet music rental, equipment transportation, marketing, and program printing.

Lastly, a fun question: what’s your favorite piece of music to perform?

In my 22 years as a trumpet player, this is tough, but I genuinely get excited to play Jean Sibelius’ Symphony No. 2. My first experience with it was in my undergraduate program at UT Chattanooga – LCO played it a few seasons ago. It’s a fairly long symphony at 45 minutes in duration, but Sibelius manages to write in a way that melodic lines are easy to follow – the whole thing feels organic, and it ends with wonderful brass lines.